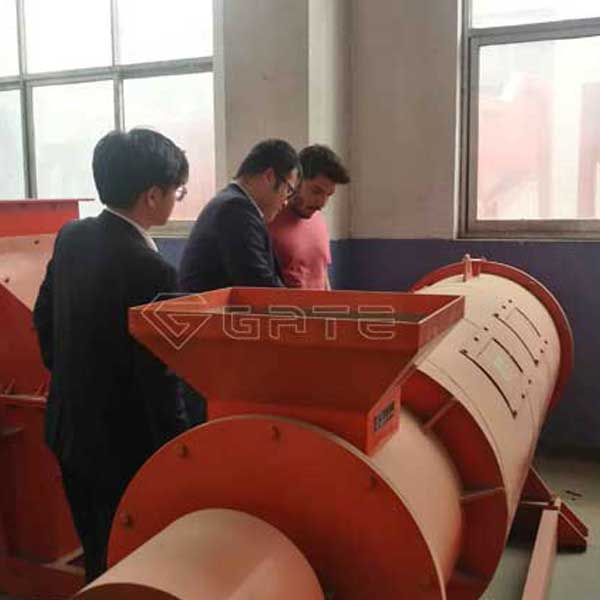 One of our most important clients visited our factory in April and accompanied our engineers to visit the production site of our domestic customers, where they discussed in detail the details of the organic fertilizer production line and took some final products as Samples prepared to be tested when they back to their country.while this visiting , the client has discussed a lot about the deodorization of organic material when fermenting.

The raw materials used to produce organic fertilizer are usually poultry, livestock and poultry manure, organic municipal domestic waste, agricultural waste, domestic waste, food waste and so on. when granulated by bio fertilizer granulator machinery.All these organic substances, especially all kinds of feces and sewage sludge, must be mature and fully fermented.our bio fertilizer granulator machine also has very cheap price,Although their decomposition produces an unpleasant odor. Deodorization has become a thorny problem. We will provide several deodorization methods, and hope that these methods can help organic fertilizer manufacturers and factories get along peacefully with their neighbors and the local environment!

It is generally believed that the odor-causing chemicals in all organic materials are mainly sulfur compounds, ammonia, fatty acids, ketones, aldehydes, phenols and other aromatic compounds and heterocyclic compounds.

Among them, ammonia (NH3) is the main odor compound. The results show that low concentration of NH3 can stimulate mucosa and cause congestion and edema of conjunctiva and upper respiratory mucosa. organic fertilizer granule making machine has a very long working life.High concentration of NH3 may seriously damage the human respiratory tract. Accidents showed that high concentrations of NH3 could quickly lead to blindness, decreased productivity, and a rapid decline in egg production. Hydrogen sulfide (H2S) is another major odor compound. When the concentration of hydrogen sulfide exceeds 0.1, it can quickly cause headache, dizziness and other symptoms. In the air; excessive inhalation can lead to coma or even death.then the organics will fed into the organic fertilizer granulator making machine.

Some odors, such as NH3, H2S and low fatty acids, are easily dissolved in water to achieve deodorization. But it needs another kind of washing liquid to avoid secondary pollution.

Combustion methods include direct combustion and catalytic combustion. When the treatment temperature is as high as 648 degrees and the contact time is 0.3 seconds, the odor can be burned directly and thus oxidized and decomposed. This combustion method is very useful for all kinds of odors. The deodorization efficiency is as high as 99%, but attention should be paid to catalyst poisoning.

Generally speaking, the process of high temperature organic fertilizer or chicken manure fermentation and compost turning over manure is the cause of odor spread. Some odors, mainly from poultry manure and other organic substances, can even be smelled two kilometers away. The application of biological deodorization technology can solve the odor problem from the following aspects.

During the fermentation and processing of poultry manure and other organic substances, these biodeodorizing microorganisms can effectively decompose and transfer the odor emitted within 48 hours. Long-term application experiments show that the odor and unpleasant odor released by organic fertilizer plants can be significantly reduced or disappeared in a short time.

Generally speaking, microbial deodorization is the result of the interaction of multiple microorganisms. These microorganisms can effectively absorb and decompose various odors, such as SO2, H2S and CH4, so as to produce acidic environment and avoid spoilage of microorganisms.

Generally speaking, sealed fermentation and processing workshops can prevent the release of unpleasant odors. Installation of air intake fans on one side of fermentation and processing plants and exhaust fan with exhaust pipes on the other side are deodorizing equipment used in many factories. Deodorization can be achieved by discharging waste gases and odors from solid or liquid biological pools with active microorganisms.

If you are looking for fertilizer granulators or want to get a organic fertilizer factory solution, please feel free to leave a message or sent email to us, we will answer your questions asap and respect your privacy. Thanks for your support.

Inquiry For More Info about fertilizer granulators or organtic or compound fertilizer machine production line!Send Email To E-mail:sales@gateind.com.Your email will be secreted totally,pls feel free to leave your email.